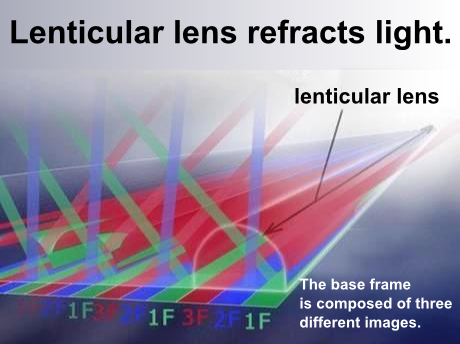 Lenticular printing is a multi-step process which consists of creating a lenticular image from at least two images,and combining it with a lenticular lens. This process can be used to create various frames of animation (for a motion effect), offsetting the various layers at different increments (for a 3D effect), or simply to show a set of alternate images which may appear to transform into each other. From there the interlaced image can be printed directly to the back (smooth side) of the lens, or it can be printed to a substrate (ideally a synthetic paper) and laminated to the lens.
Images that change when viewed from different angles predate the development of lenticular lenses.Extant double paintings, with two distinct images on a corrugated panel, are known from the 17th century. The name of  the  french artist that first used that technique was Gaspar de Bois Clair.
The principle of lenticular photography, through the use of lenticular lenses, first arose around nineteen hundreds as a novel way of presenting well known illusions such those of depth and animation.
The early lenticular process patented  "barrier grid technique for animated autostereograms"  created in the end of the eighteen hundreds
were improved by Maurice Bonnett in the  1930s with his reliepho-graphie technique and scanning cameras.

Insert copy here, which should vary depending on your region. Accept